British golden chinchillas – how the royal cats were bred

The British golden chinchilla was first bred in the late 19th – early 20th century, more precisely in 1882 in Great Britain. Smooth-haired silver British cats and red Persian long-haired cats were the producers. As a result of multiple crossbreeding, kittens with a luxurious golden color and with the quality of fur inherent in the British breed began to be born in the litter.

The golden gene went to British cats from the red-haired Persians. After removing a rare suit – chinchilla with a golden color, the breeders only had to consolidate the result. Scientists have thoroughly investigated the phenomenon of the birth of kittens with a unique color – a soft plush undercoat, silky top coat of a golden hue with dark ends. The wool resembled in appearance a fur coat, like that of a famous and beloved animal – a chinchilla.

How did British golden chinchillas come about?

An interesting fact is that initially all British golden chinchilla kittens are born with a variegated or striped tabby color (tabby). Only after about three months does it become shaded. 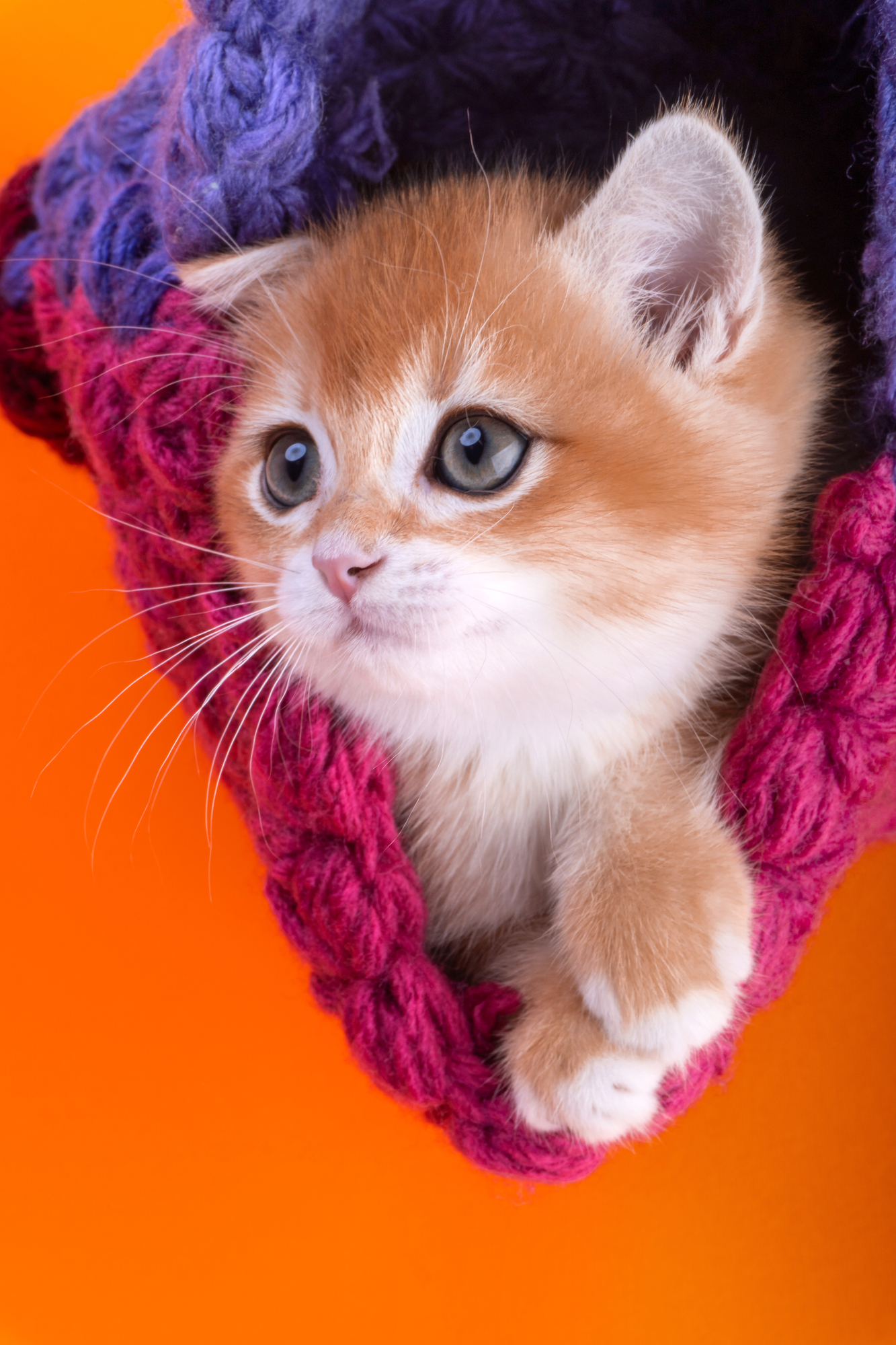 The coat of the British golden chinchilla has a pronounced gradient – a smooth transition from a delicate apricot color at the base to black tips. The color has a slight black shading, which is especially pronounced on the middle part of the back, on the sides, on the tail.

At the end of the 20th century, a famous kitten named Silver Lambkin was born. He became not only the ancestor, but also the officially recognized representative of the British golden chinchilla. His black and white photographs have survived to this day. It can be considered that he was a long-haired British.

In 1880, Silver Lambkin was presented to the public. Thanks to his birth, the British Golden Chinchilla breed was approved by the international organization CFA (Cat Fanciers’ Association) for breeding and breeding of new cat breeds.

Description of the disposition and habits of the golden chinchilla

The golden chinchilla is a cat with a truly royal appearance. But not only beauty betrays her noble origin, but also her temper. British chinchillas can boast of a unique character set in which self-sufficiency is harmoniously combined with tenderness and meekness.

A characteristic feature of chinchilla cats is calmness and quiet disposition. It is very comfortable to be under one roof with them. They are not noisy, they move sedately with regal imposingness. In any situation, they retain the dignity inherent in pets of the British breed.

This breed is considered to be quite lazy, hyperactivity is not their strong point. Another distinctive feature of British chinchillas is restraint. They do not torment their owners with annoying meows. Although they like to “talk” like cats with their domestic human flock. They make very original sounds, in accordance with the situation, which intuitively the owners understand what their golden chinchillas are purring about.

British chinchillas of golden color have a developed intellect. They do not behave recklessly, all their actions are meaningful. They have a friendly character, they get along with everyone in the house: adults, children, other pets. They calmly react to guests.

If you offend a British cat, she will neither bite, nor scratch, nor take revenge. The maximum she will show her displeasure is to retire into the inaccessible zone until the resentment passes. 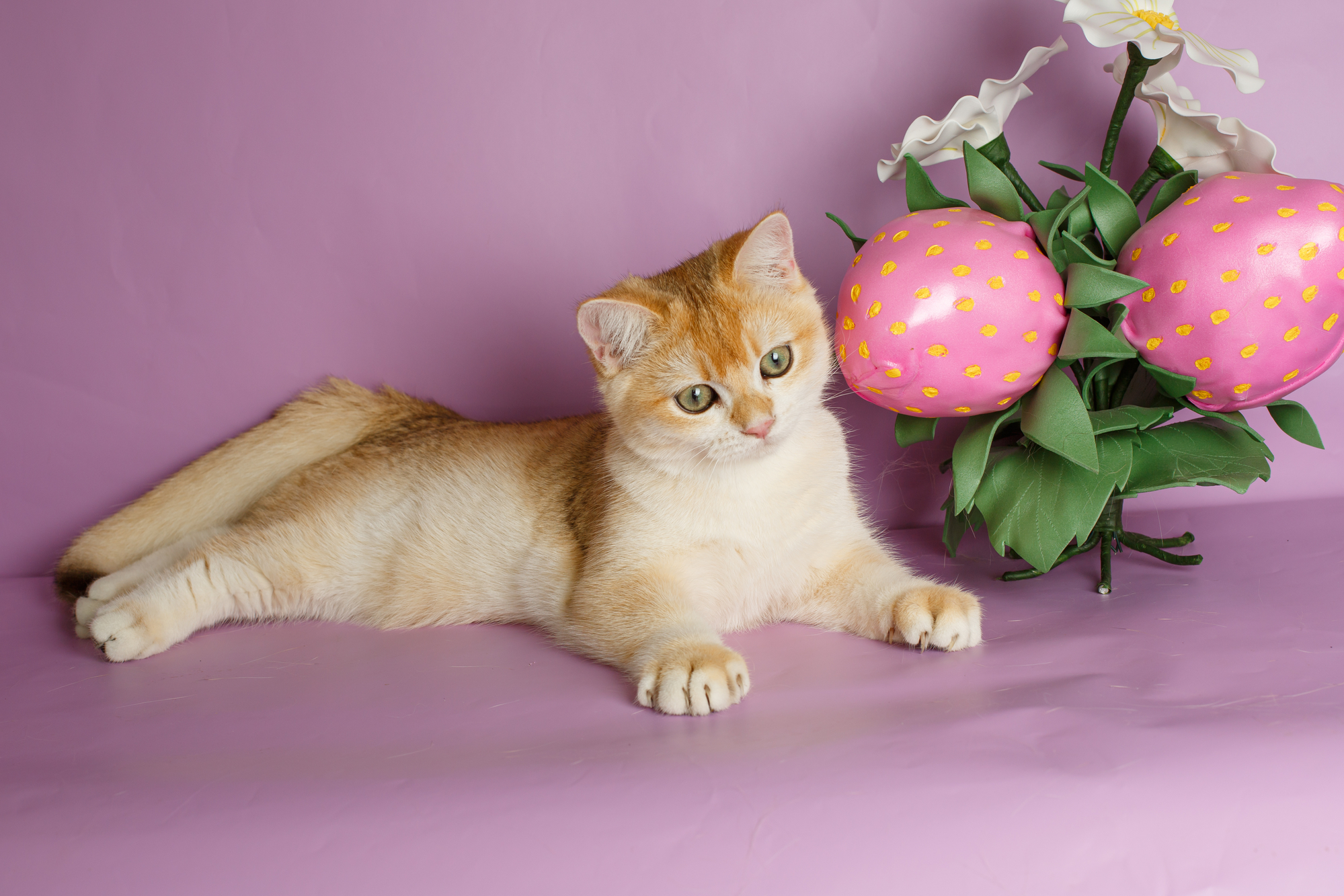 Aristocratic nature does not allow British chinchillas to forget about the rules of etiquette. Peeing is always strictly in the tray, there is – in the kitchen, do not scratch the furniture, do not bother the owner with a loud meow.

The first cats of this breed became known to the world through exhibitions. Ideal representatives of the breed were selected to participate in exhibitions. Behind the birth of a kitten that meets international standards, there is a huge work of professional breeders. Parents-to-be are selected according to many criteria.

First of all, they select absolutely healthy males and females. Specialists carefully study all the information indicated in the veterinary passports, check the pedigree. Unhealthy individuals, even outwardly meeting the standards, are not allowed for breeding.

After checking the health status, breeders carefully examine the appearance of the animals. The color should be uniform, the presence of spots on the coat or a pattern unusual for the breed is prohibited. All defects and deviations from the standard can be passed on to the offspring.

The golden gene is only present in British cats with golden or silver coloration. For this reason, only these species are crossed with each other. The color of the chinchilla’s iris should be predominantly emerald. Although an admixture of a blue tint or yellow eyes is allowed (does not apply to breed standards), British cats with green eyes are chosen for breeding.

By purchasing a British golden chinchilla kitten from professional breeders, you can be sure of the purity of the breed. The owner will receive a healthy animal that meets standards, with an agreeable character, well amenable to training.

The cost depends on many factors. Representatives of the breed for participation in exhibitions are more expensive. British chinchilla with minor signs of non-compliance can be purchased at a more affordable price. She will be a faithful companion, affectionate and loyal pet, as well as home decoration.