British shorthair cat of golden shade Vancouver is a real find for lovers of luxury and chic. British representatives of the cat family are unusually beautiful, intelligent and docile animals. They become not only a decoration of the house, but also loyal companions for their owners.

Features of the British chinchilla breed

The golden British Shorthair cat has a strong and muscular build. A round head with widely set, rounded ears, with a slightly flattened muzzle and voluminous cheeks. The neck is short, thick, folds in an adult animal.

British golden chinchillas of incredible beauty have emerald eyes. Sometimes individuals are born with an emerald-cornflower blue or turquoise shade of the iris. The amber eyes of a British cat with a golden coat also look luxurious, but they are not an approved sign of the CFA standard.

The coat of the British golden chinchilla is multi-layered. It consists of a guard hair and an undercoat, which is why the British coat is plush. The coat of a chinchilla cat is soft and silky to the touch. Such a luxurious fur coat needs careful care: regular combing once a week with a special brush, bathing once every 3 months, the use of vitamin and mineral complexes.

There are British veiled (ticked) and shaded (tipped). In the first version, it is also called Abyssinian, the dark tip occupies 1/8 of the hair. Each hair has two or three shades, smoothly flowing into each other. Double or triple ticking does not form any pattern, but looks like a haze, which is why Britons with veiled wool are called smoky.

In golden chinchillas, the undercoat is usually light apricot or pale cream shade, the main color is golden, and the tips are painted in a dark tone. When moving, the fur coat of a ticked British cat seems to play and shimmer. A kind of veil effect is created.

The shaded coat of the British chinchilla is when the hairs are dyed 1/3 of the entire length. The tipped (two-tone) coat has a lighter shade at the base and darker at the ends. Shaded hair looks brighter on the back and on the sides, on the tail, and on the upper parts of the limbs. 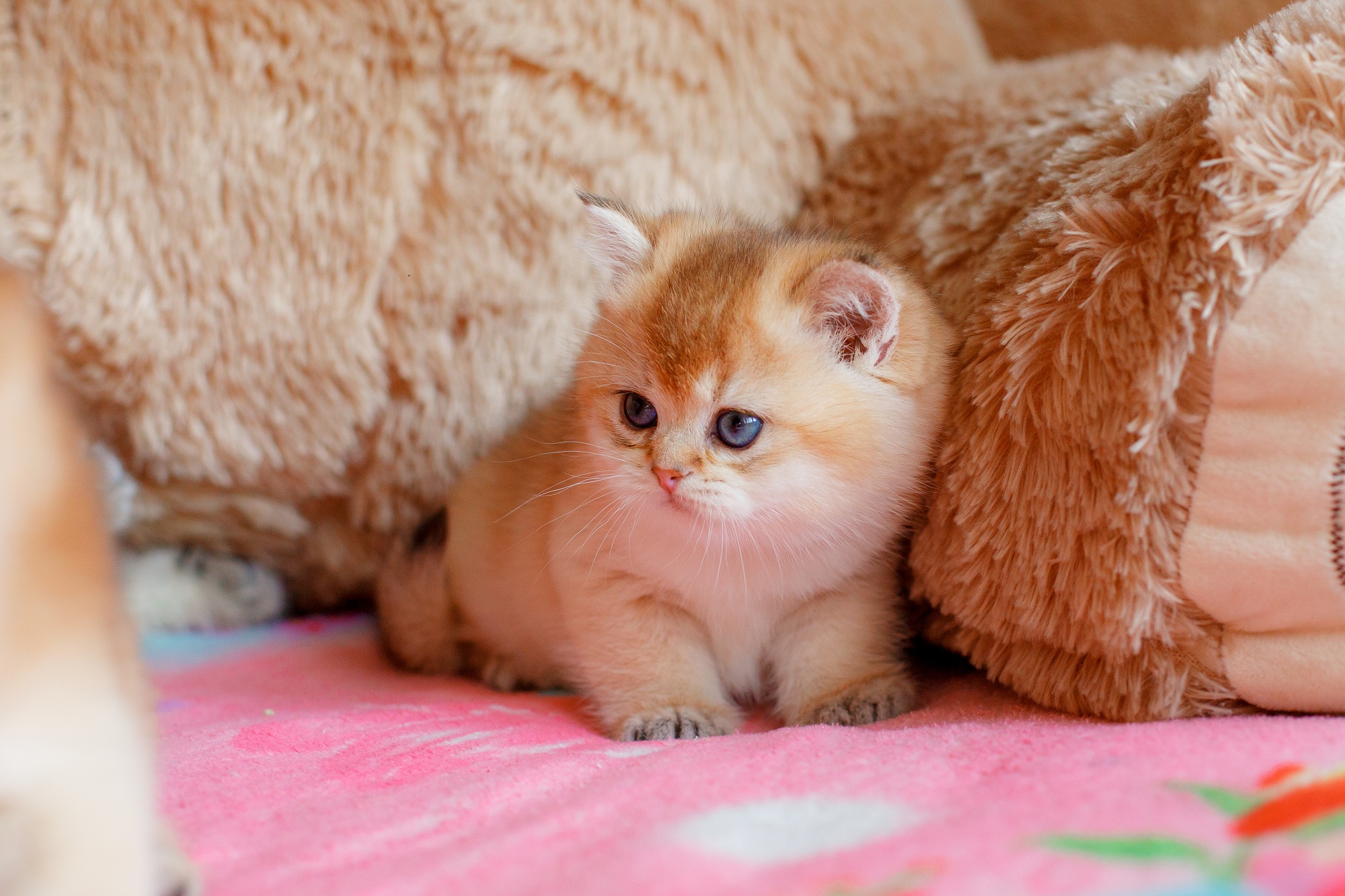 If the hairs are dyed ½ the length, then this British cat color is called a golden tabby. Varieties of tabby color:

Golden tabby British cats have a golden base tone and a darker pattern. A characteristic sign of the tabby color is the “scarab sign”, when on the forehead of the animal the fur pattern looks like the letter “M”.

Little Britons usually have a clear and contrasting pattern on their fur. In the period of growing up, the picture seems to “blur”. Only after a year can you see the formed tabby color in the British cat.

Golden British Shorthair kittens are real “suns”. Their coat is fluffy and soft. The plush coat of kittens has many shades: from light amber to dark gold with dark variegated tips that give the coat a veil or haze effect.

An interesting fact is that all British golden chinchilla kittens are born with a ticked color that resembles a tabby. By the age of 1 year, the color of the coat becomes uniform: shaded or veiled.

Young aristocrats of the feline world differ from their adult representatives of the breed only in a touching look and playfulness. Of course, there are differences in the content of a small and an adult British. But good nature and at the same time restraint, manners, self-sufficiency, English self-esteem can be traced from childhood.

How to choose a golden chinchilla kitten

British kittens conquer at first sight. Seeing a fluffy, golden miracle, I want to pick it up right away. But the British baby will grow up and turn into an adult cat. Do not just be touched, the choice of a golden chinchilla kitten should be approached with all seriousness.

First of all, decide for what purpose you are purchasing an animal: as a pet or to participate in exhibitions. What to look for when choosing a British Golden Chinchilla kitten:

The peculiarity of pedigree cats is that they are not entirely tame. The British allow themselves to be stroked and played, they can sit on their hands with pleasure or sleep, curled up in a ball next to the owner. But any manifestations of tenderness occur only at their will, it will not work to force the British cat to do this.

Where to buy a golden chinchilla

Professionalism and responsibility is evidenced by the fact that breeders are engaged in breeding only one breed, and do not offer “purebred” kittens for every taste and budget. This approach is irresponsible.

It is hardly possible to buy a truly thoroughbred kitten from unscrupulous breeders. It is possible that it is possible to acquire a simply adorable baby of the “yard” breed with a randomly obtained unique and beautiful color.

But when future owners aim to take not just an attractive kitten, but a purebred representative of the breed, then they need to take the choice of breeders with all responsibility. To begin with, make sure that the specialized nursery is officially registered and has its own website, and not just some name and announcements on different boards.

Upon arrival at the nursery or professional breeders, you must ask to show the parents and the documents for them. Both individuals must be healthy, well-groomed, all signs of the breed are present, and the CFA standards are indicated in the veterinary passport in the form of codes.

Golden British Shorthair kittens for sale must also have veterinary passports indicating appearance standards and color codes, as well as the type of coat (ticked, tipped or tabby).

When you want to buy a British chinchilla kitten, do not save time and do not rush to choose. Examine the description of the appearance, standards, character, characteristics of keeping and feeding the animal. This will give owners a complete picture of the breed’s characteristics and behavior of their future pet.